PSL Officer Acting Above the Law Caught on Video 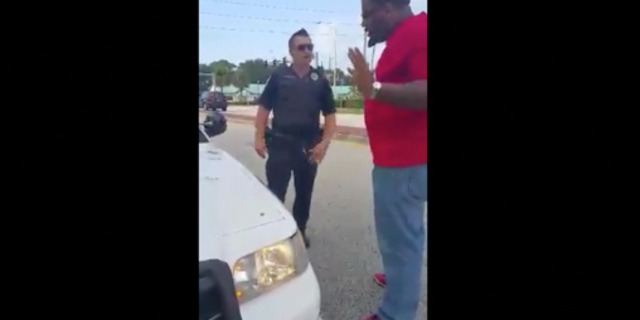 The copper got caught on video and received a 10day unpaid suspension.

“You almost hit me,” the man is quoted as saying.

Chapman replied, “I did not almost hit you, I am an emergency (expletive) vehicle,” the report states.

The man asked Chapman not to curse at him.

“Don’t tell me what I can and can’t do,” Chapman said.

Asked again not to curse, Chapman said, “What are you going to do about it?”

Officer Jason Chapman received the suspension after an incident May 10 that began when the man swerved to avoid the police vehicle.

The man, his wife, their two children and a disabled family member were traveling on Southeast Port St. Lucie Boulevard when Chapman, who was on duty in a police car, made a U-turn, causing the man to swerve.

Chapman sped past the man, and stopped at a red light at Southeast Morningside and Southeast Port St. Lucie boulevards. The man pulled up beside Chapman, waving his hand and sounding his horn.

The man said he calmly told Chapman that Chapman nearly struck his vehicle. Chapman used foul language and told the man to pull over, the report states.

“Officer Chapman stated something to the effect of why the (expletive) are you stopping me, don’t you know I’m a cop,” the report states.