Local counties have dedicated millions to fight All Aboard Florida and spent hundreds of thousands already.

So it is with the funds Indian River ($2.7 million) and Martin ($1.4 million) counties earmarked in February to fight All Aboard Florida’s Miami-to-Orlando passenger rail project.

To date, Indian River has spent $326,500 in legal fees; Martin County has spent $48,800. Neither of these totals includes attorneys’ bills for the three-hour hearing May 29 in federal court in Washington, D.C.

Moreover, both counties have additional All Aboard Florida-related expenses depleting their accounts. Martin County’s total expenditures, to date, including legal fees, are $206,800.

They spent over $500,000 recycling the same shoddy arguments presented by local AAF opposition that relies on feelings rather than reason. The federal judge ruled:

Cooper said, “the counties have not demonstrated, as they must, that (additional costs of alternative financing) would significantly increase the likelihood that AAF would abandon the project after years of planning and over a billion dollars in investment.” Cooper, while acknowledging “the vigorous debate in Central and South Florida over whether the express railway should be built,” wrote that “the merits of (All Aboard Florida) are not for this court to decide.”

The lawyers reaping the tax dollars who have put up lousy arguments and rely on a fishing expedition of AAF communications are hoping the counties gravy train of tax dollars rolls on.

“It’s really important for people to realize this is not over,” said Steve Ryan, the Washington, D.C.-based attorney representing Martin County. “The first loss was disappointing, but this is a difficult, skilled opponent that is terrific at promulgating the notion their success is inevitable.

Meanwhile there is a huge backlog of infrastructure repairs and improvements in Martin County and a decline of community assets in Indian River County. Neither county is much closer to fulfilling their requirement of maintaining and improving railway crossing safety either.

So far, county officials have been good stewards of taxpayers’ money with respect to All Aboard Florida. 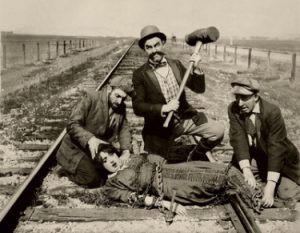 tTCPalm sets the bar really really low by saying that they have been good stewards of money by failing taxpayers again and leaving less money to do their own jobs which will likely lead to tax increases in both counties. The only good thing is they’ve only spent a half million of the millions they were once ready to waste.