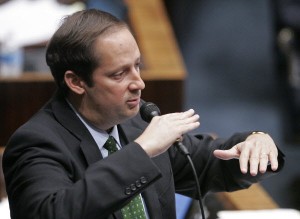 While conservatives and republicans talk a good game about limiting government during an election they disappoint when in office.

VGTI and Torrey Pines have been a drag on taxpayers and now that drag is being extended. Amazingly some think that taking from others to give to these failing companies is a grand idea.

“It’s an amazing accomplishment that our delegation was able to get $2.5 million for Torrey Pines and VGTI in a difficult budget year,” Negron said. “I look at this funding as a lifeline to these two important organizations on the Treasure Coast.”

Corporate welfare sure didn’t seem like one of his planks. In typical fashion the companies socializing their losses and privatizing non-existent profits are asking for more.

Still, $2.5 million is a decrease for both biotechs, which each received $3 million last year from the state. It’s also a significant cut in the $5 million VGTI Florida requested from the state to survive.

Meanwhile Greg Oravec is presiding over a city with near one billion dollars in debt and telling VGTI and Torrey Pines to get their fiscal houses in order. Oraved has a billion issues to work out before chastising others.

The two biotechs must get their fiscal houses in order within the next year, according to Mayor Greg Oravec.

“I agree with Sen. Negron that this funding is a lifeline,” Oravec said Wednesday.

VGTI has more work to do to get its fiscal house back in order, Oravec said.

This is what happens when you let people decide what to do with other peoples money while not paying the consequences for their actions. Failure all over.