Recently, a local government and their public relations team at Scripps Treasure Coast Newspaper have been promoting the acquisition of weapons of war by local law enforcement. We’ll look at the two most recent public statements of a local police officer and a Scripps journalist.

Keith Holmes, a Fort Pierce Police Officer, that was reported to have spearheaded the acquisition of a Mine Resistant – Ambush Protection 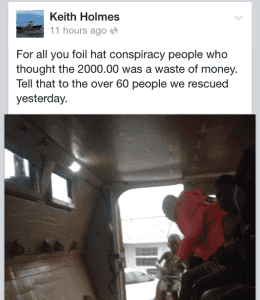 (MRAP) armored military vehicle for the Fort Pierce Police Department has recently disclosed, on his facebook page, his disagreement with those, including myself, that disagree with the Police Department conducting such an acquisition.

He stated: “For all you foil hat conspiracy people who thought the 2000.00 was a waste of money.  Tell that to the over 60 people we rescued yesterday.”

This statement raises several questions.  It is important to provide context to the story.

The “foil hat conspiracy people” in Officer Holmes’ statement appears to be people that think purchasing the MRAP for $2000 “was a waste of money.”  And, the “over 60 people” to which he refers are, presumably, are people that were in Fort Pierce on the 9th of January, and were picked up in the MRAP during the severe rain that flooded canals, streets, parking lots, & parks. 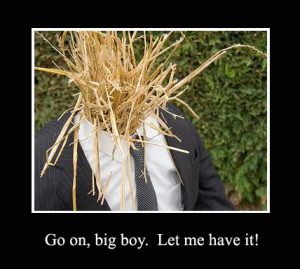 wearer” or “conspiracy theorist,” I generally question the reasoning for these labels since the terms are used so loosely.

But, alas, here we are again.  Every time citizens dare to question conduct, policy, and actions of their government, the straw-man name-calling is thrown their way in feeble attempts to discredit the dissent to the “official” government narrative by our overlords.

“Tin-Foil Hatter” was hurled at people that were concerned that the government or big brother is listening to their telephone calls, or more recently reading & storing email conversations, logs, or contacts.  Since the revelations of NSA leaker, Edward Snowden, we know that the NSA is, indeed, violating our privacy.

When citizens began speaking out against the Seven50 regional plan, the government’s public relations team at Scripps Treasure Coast Newspaper were quick to bring out the straw-man in their first of several articles designed to ensure that a public debate remains one-sided in an article titled: “Break out the tin-foil hats, the socialists are coming.”  We now know that indeed Miami-Dade and Broward would be the big-dog power players in the proposed regional plan.  We now know that there were many more federal strings than the plans proponents led the people to believe.

People that were opposed to the pretenses of the Iraq war, Hussein having Weapons of Mass Destruction (WMD), were called names, including “conspiracy theorist.”

Officer Holmes’ statement is that: 1) the MRAP cost $2000, and 2) the acquisition was not a waste of money.  The heavily armored MRAP, which stands for Mine-Resistant & Ambush Protection, was designed to withstand improvised explosive devices (IED’s), roadside bombs, and ambushes in the Afghanistan and Iraq wars. Since 2007, the Defense Department has bought 25,000 MRAP’s for about $48 Billion, which amounts to over $1.9 Million per MRAP.  The article states that the MRAP purchased by the Police Department, with 5,000 miles on it, is valued at $700,000.

If we narrow the debate around whether $2000 is worth the expenditure, most would logically conclude that purchasing an item valued at $700,000 for a price of $2000 is a steal of a deal. But, this framing of the debate ignores the continued maintenance expense, the insurance expense, or the operational expenses such as fuel.

The “it’s worth $2000” argument is grossly misleading.  In addition to the continued maintenance and operational costs, the tax-payers first paid $1.9M, then another $2000, for the same product.

However, when considering that members of the city commission had recently justified a 15% tax increase, to their constituents, on not being able to cut anywhere in the budget citing “we have no other option but to raise taxes,” the question is not whether it is worth $2000.  The question is “is it a necessary expense”?

With this in context and acknowledging that 1) there has been no IED type devices exploding on Fort Pierce roads, 2) there is no threat of the Fort Pierce Police Department being ambushed by any invading army, 3) people work hard for their money that is seized through taxation, and 4) their earnings are not a play-ground to spend on any potential situation that someone dreams up, one can only logically conclude that the purchase of the MRAP was an unnecessary expense.

It is unclear whether the 60 people were rescued from the 10.6 inches of rain Fort Pierce received or merely provided a means of transportation as of this writing.  But, a narrow attempt to justify the acquisition of the MRAP was seized on by government and their public relations team in promoting the vehicle being used during the heavy rain.  The most recent Scripps article says that Sgt Schramm and Officers Holmes and Avilla drove the MRAP across the City of Fort Pierce Thursday for over seven hours picking up stranded residents.  It is unclear why Officer Holmes did not utilize his Department provided raised F-350 4×4 pickup truck in addition to the other two officers driving the MRAP.

If any of the proponents of weapons of war returning to American cities have ever been to Mud Jam, held in western St. Lucie County, they would know that there are plenty of vehicles in the community capable of performing rescue operations during heavy rainfall.  However, the government prohibits the use of many of these vehicles on public roads, yet we are to believe weapons of war are perfectly acceptable.

There were citizens driving “street legal” trucks picking up stranded motorists and pedestrians, some in the same truck the Department has already provided Officer Holmes.  I saw a semi-truck doing the same.  Tow-truck drivers were pulling vehicles out of the water.  Trucks from local private companies were out helping people as well.  Residents provided warm-dry shelter for others stranded.  Local property owners provided dry parking for some motorists.  These people deserve the same gratitude for their selfless display of human compassion.  Unfortunately, they will remain as silent hero’s since the MRAP promotional campaign was being pushed.

If the argument to support the battle-wagon MRAP acquisition is to provide rescue from a flood, it fails miserably.  There are plenty of assets in the community held by private residents, companies and local government that are already capable of providing flood rescue functions.

Lastly, we look at why the Police Department purchased a piece of equipment designed to withstand roadside bombs and guerilla ambushes, 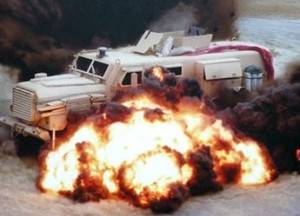 The MRAP’s are becoming less of a necessity as US involvement in the Afghanistan and Iraq Wars declines.  Let’s not forget that the latter was built on false pretenses, and it is safe to presume that some of the people opposed to this acquisition now are the same people that opposed the Iraq War.  It should be no surprise that they are referred to as “conspiracy people” in both instances by our big government apologist friends.

As we wrote a year ago, the theory behind the economic public policy supposes that the tax-payers, through their government representatives, need to provide incentives for economic growth and subsidies to select industries or businesses for stimulus purposes when the original theory proves to be a failure.

The MRAP was sold well below market value because of the over production created, in part, from a war based on lies, that was backed up and promulgated by the government’s public relations teams in the media that were eager to lick the boots of those in power.  Now, the federal government has an abundance of equipment that will sit in storage unless they unload them.  If anyone has seen the movie Lord of War, one can ascertain how profitable the Military Industrial Complex can be.

Any decent marketing research of excess military equipment will most likely seek to sell the equipment in 1) foreign markets to foreign governments or other combatant forces that may encourage future hostilities, or 2) law enforcement agencies.

In the first case, we may be brought back to a future military conflict led, in part, by the actions of the military surplus marketing campaign, just like we have experienced in the past such as with the Mujahideen and bin Laden coming home to roost.

In the second case, they have to find justification (or selling points) to the public for domestic law enforcement to obtain weapons of war that were previously never utilized in American cities.  So, what could this equipment be utilized for besides its designed use on the battlefield?  Flood rescue, of course!  How about a battle ram for the Fire Department?  Maybe they should have one too!  Rest assured, it will not be used for crowd control, public intimidation, or coercion. 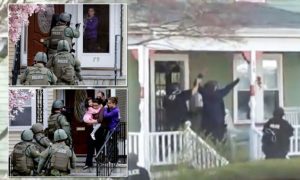 teams as they enforced the War on Drugs, incarcerating non-violent people, and lining the pockets of criminal gangs and drug cartels that are incentivized to promote violence.  This led to Police Officers being turned into para-military forces, performing “no-knock” raids, 4th Amendment violations, and hostile activities that now has resulted in more American citizens killed by police than killed on the battlefield over the last decade.

This became the new normal in America.

The War on Terror has brought federal law that violates constitutional rights such as provisions in the Patriot Act and National Defense Authorization Act, the latter was the legal vehicle for the Police Department’s acquisition of the MRAP.  Provisions of the Patriot Act allow for secret courts to issue secret, blanket, and indiscriminate warrants for authorities to monitor every American citizen, subjecting them to potentially being a criminal or terrorist because some secret process, that is not available to the public, deems them so.

This then became the new normal in America.

Now, as domestic law enforcement agencies acquire armored carriers and Mine Resistant Ambush Protection vehicles, there will be a new precedent set for our children to become accustomed to being the new normal in which they will grow up.  Anything becomes possible. One day in the near future, hand grenades or rocket propelled grenades could become normal devices used in American cities, all while the future generations would say that is perfectly normal in a free society.  There is, literally, no stopping this progression unless the public takes a stand and says “no, this is completely unnecessary, unacceptable, an unjustifiable expense, a breach of the public’s trust, and weapons of war have no place in American cities.”

At the Virginia Ratifying Convention of 1788, James Madison said:

Since the general civilization of mankind, I believe there are more instances of the abridgment of the freedom of the people by gradual and silent encroachments of those in power, than by violent and sudden usurpations; but, on a candid examination of history, we shall find that turbulence, violence, and abuse of power, by the majority trampling on the rights of the minority, have produced factions and commotions, which, in republics, have, more frequently than any other cause, produced despotism.

Sign the petition telling City Hall to sell the MRAP for profit and take unnecessary burden on city residents.