All Aboard Florida’s Sweet Seven50 Subsidies 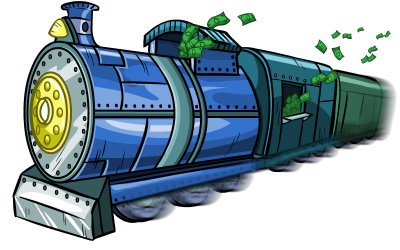 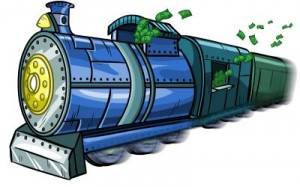 The federal administration is likely to approve a sweetheart loan subsidy that you nor I could qualify.  This artificially low interest rate terms is tied to an agency which was founded to help subsidize rail companies.

What most are unaware of is that there is a pipeline of subsidies and artificial advantages that will benefit All Aboard Florida for the years to come.

The Sustainable Communities Initiative funds both Seven50 and additional subsidies that will benefit All Aboard Florida in conjunction with Tri-Rail in South Florida.

The Seven50 scheme is part of a broader plan to institutionalize the special interests of new urbanism in South Florida for the next 50 years.  Most local governments have opted out of Seven50 on the Treasure Coast though the Treasure Coast Regional Planning Council has lobbied passionately for Seven50. Yet TCRPC portends to address concerns about All Aboard Florida on your behalf.

Southeast Florida is at the beginning of a fundamental transformation of its transportation system to meet the needs of a 21st century economy:

• Seaports and airports are preparing for anticipated growth in global trade and tourism through major projects including the [highlight]deep dredge, tunnel, and on-dock rail service at Port Miami[/highlight], and the runway extension at Fort Lauderdale/Hollywood International Airport;

• [highlight]Plans for the All Aboard Florida passenger rail service from Miami to Orlando and the Tri-Rail Coastal Service from Jupiter to Miami are moving the region toward a more integrated multimodal transportation system for moving residents, visitors and goods[/highlight]; and

• The revenue-generating success of the tolled express lanes on I-95 in Miami-Dade and Broward County is prompting plans for “managed lanes” on other expressways. Managed lanes are often unpopular and when used should integrate and encourage the provision of mass transit service.

•Continuing to build out a network of passenger rail and transit systems connecting major urban centers;

It should be noted that the Seven50 scheme includes both freight and passenger rail subsidies as part of its transportation subsidy plans.  Florida Not All Aboard poses rail as a backup plan for All Aboard Florida when clearly the Treasure Coast Regional Planning Council, the South Florida Regional Planning Council, HUD, DOT and EPA are all clearly outlining plans to subsidize both passenger and freight rail for the next 50 years.

Seven50 states what is happening today:

The regional transit particularly speaks to All Aboard Florida.  The idea of Seven50 is regionalism.  Everything will be focused around Dade. The other big players in South Florida get stops for All Aboard Florida so there will be interegional transit with Orlando. Connecting tourists in South Florida with Orlando tourist attractions and vice versa.

It should also be noted that the big cities control the discussion.  The Army Corps of Engineers is even taking sands from offshore to redistribute to Miami.  Our voices matter not in regionalism.  This is why so many Treasure Coast governments opted out of Seven50.  This is also why the voices will not stop All Aboard Florida.

Back to Seven50 subsidizing both passenger and freight rail. 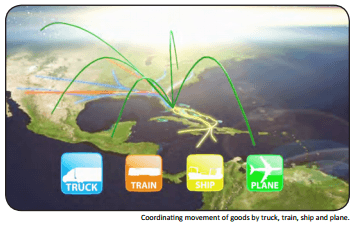 [highlight]An intermodal logistics center (ILC) is a location separate from an airport or seaport that provides for the transfer of freight between vehicles or vessels[/highlight] and also provides value-added logistics services such as consolidation, warehousing, assembly, customization, finishing, packaging, cold storage, and fumigation. These can become inland focal point for logistics and manufacturing activity. The South Florida Logistics Center under development by Florida East Coast Industries in Hialeah Yard recently received a $2.5 million grant as part of the state’s ILC Infrastructure Support Program and expects to create over 1,000 jobs. Other ILCs are being planned in Palm Beach and St. Lucie counties.

Sweet sweet rail subsidies that Seven50 is dishing out.

Seven50 makes the pitch for rail:

If one looks back far enough, the region had a history of diverse transportation options. Most of Southeast Florida’s settlements originally grew around rail stops along Henry Flagler’s Florida East Coast (FEC) Railway. Many of these stations were also once connected to local streetcar lines supplementing the horse drawn wagons of the day. A number of the historic FEC passenger station structures can still be seen today, sitting idle, as the FEC line has not carried passenger trains for the past several decades.

There is a bigger agenda of rail being pushed throughout South Florida and the nation as other similar plans are hatched with local tweaks.

A seven-county transportation model was developed as part of Seven50. This common platform allows for a conversation about mobility across jurisdictional boundaries. This model looks beyond the 2040 time frame to 2060.

[highlight]Transportation partners convened in November 2012 in Minneapolis through the Southeast Florida Regional Partnership and the Sustainable Communities Initiative Leadership Academy to discuss the South Florida East Coast Corridor (SFECC) Study. The convening led to execution of the Minneapolis Accord, which identifies roles and responsibilities to advance regional passenger service on the FEC Rail Corridor in Southeast Florida. Transportation partners included FDOT; SEFTC; the SFRTA; the Miami-Dade, Broward, and Palm Beach  MPOs; the SFRPC; and the TCRPC.[/highlight] The next phase for the SFECC Study, now called the Tri-Rail Coastal Link Study, is project development.

Seven50 continues to state their dedication of principle to rail:

Seven50 then states its intent to guide people to live in a manner that will induce them to using rail and benefiting FEC:

A significant percentage of the roughly three million new residents in the region are accommodated in complete, compact, walkable, mixed-use areas served by transit along the Florida East Coast rail line, primarily within Miami-Dade, Broward and Palm Beach Counties. [highlight]Public investments are carefully selected and strategically located to have the greatest impact such as redesigning key streets to encourage more mobility options like walking, cycling, and transit. Funding for these public investments will need to be identified and secured. [/highlight]

For those complaining about car traffic due to All Aboard Florida- forget about it.  Seven50 wants to get you out of your car and they will tax you out of it.

[highlight]A high percentage of new residents are accommodated in walkable, Transit Oriented Developments (TODs) along existing rail lines that extend from Miami-Dade to Sebastian Inlet. [/highlight] Existing transportation networks are maintained and operated efficiently. Street design for the region is upgraded to multimodalism including, connecting most neighborhoods to rail transit by streetcar or bus.

…A significant percentage of the roughly 3 million new residents by 2060 are accommodated in walkable, transit oriented development centers along existing rail lines such as the FEC and CSX lines which extend from south of Miami to Sebastian and beyond. Neighborhoods and communities are better connected to rail transit by streetcar or bus.

…as the region readies for the expanded opportunities which will come with the widening of the Panama Canal, its seaports are reaching physical capacity (both land side and waterside) and too often are not effectively connected to the highway and rail networks.

Continue to advance key seaport, rail, and highway infrastructure investments to prepare for the anticipated growth in trade following the Panama Canal widening;

Seven50 even has a bone to throw the communities of those affected by All Aboard Florida and other Seven50 subsidy schemes which is a walking path along the FEC railway.

The path would help move people to and from the regional rail networks including the Coastal Link and All Aboard Florida stations, improve safety by reducing trespassing on the tracks, and create an amenity to the communities that are going to be impacted by the new rail service.

Seven50 discusses the MPOs that have been vital in helping plan the subsidy schemes but have failed local areas.

(MPO) is a federally mandated and federally funded transportation policy-making organization in the United States that is made up of representatives from local government and governmental transportation authorities. Federal funding for transportation projects and programs are channeled through the MPO planning process.
• The MPOs play a role in planning and implementation of transit projects and overcome the very real obstacles of operation and maintenance costs which are not discussed in this report which intentionally concentrates more on the “what” and less on the “how” of improving the region.
• There are six MPOs in the region. To describe the work of the MPOs we can use of one MPO’s recent accomplishments. The Broward MPO: leads the Wave Streetcar project in downtown Fort Lauderdale, is working on a Transit Oriented Development Project at the Cypress Creek TriRail Station (which is conceptually depicted in a rendering in this report; assists in the siting of 5,000 housing units in downtown Fort Lauderdale, is working on the Port Everglades Florida East Coast Rail Road on-port facility; and helps fund a water taxi system in Broward. These are projects in complete accordance with the goals of the Seven50 Project.

This plan utilized regional listening forums and scenario planning to develop policy and investment strategies to establish the State’s long-range vision and plan for enhancing rail passenger and freight mobility, and for becoming a global hub for trade, logistics and export-oriented manufacturing. Input from the Seven50 planning process was effective in influencing the plan to the benefit of the seven-county Southeast Florida Region.

Seven50 notes the partership between FDOT, SFRTA and FEC:

This Seven50 effort, brought together the region’s two largest transportation planning organizations and Florida East Coast Industries. The purpose was to set in motion negotiations for reintroducing commuter and express passenger rail services of all kinds on the FEC railway, opening up the opportunity for passenger rail service between Miami to Sebastian and beyond.

Seven50 wants to slow life to a leisurely stroll, or may be a crawl:

We envision a paved path for cyclists and pedestrians from Key West to Sebastian Inlet. Currently our region offers a patchwork of trails and there are a variety of ways to connect those trails. The surest route may be a path within the Florida East Coast railroad right-of-way which extends from Miami to Indian River County. A paved path was proposed in the early versions of the Department of Transportation’s commuter rail plans (a rail-to-trail plan) but
the future of this path became uncertain when All Board Florida introduced its new Miami-Orlando passenger rail concept. As All Aboard Florida connects the region with rail, with municipal assistance it could also provide a trail to further connect the region.

Even more from Seven50 on commuter rail:

Seven50’s commitment to subsidizing rail is not limited to just passenger:

Broward MPO has taken the lead in developing the “Cargo 2040” freight plan through Southeast Florida Transportation Council for the three southern counties. This effort is intended to recommend actions that improve the movement of goods within Broward, Miami-Dade and Palm Beach counties. It will be overseen by a 21-member “Regional Transit Technical Advisory Committee Freight Subcommittee” with membership from the 3 southern MPOs, FDOT (Central Office plus District 4 and District 6), the airports and seaports, economic councils, Miami-Dade Expressway Authority, Florida Turnpike Enterprise, railroads (CSX and FEC), and freight business representatives. The movement of freight and goods impacts the entire region as it must continue north through Martin, St. Lucie and Indian River counties via their network of highways, railroads, and waterways.
Short-Term Priority:
• Invite a freight representative from Martin, St. lucie, and Indian River counties to join the Regional Transit Technical Advisory Freight Subcommittee.